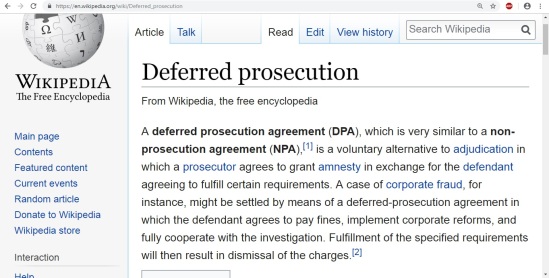 Deferred prosecution is a way for things to disappear. In a flash. By the stroke of a magistrates pen everything disappears. A fine is paid, Libya is still looted, but poof. It’s gone.

JWR was correct to refuse interfering. She just was. The Reds trump it up to her inexperience; belittling her and lessening her contribution to our democracy by upholding it. The Government needed fresh faces; new blood who are not part of the ‘old guard’ that I so fondly spoke of during the last election.

Calling things out is necessary. Ignoring war crimes is wrong. Paying a fine while those making the decisions at the time enjoy lofty retirement is immoral.

On the flip side; this is a worldwide company that has done lots of good projects on every continent; employed skilled tradespeople, managers, and administrators of all stripes and from all places. They just got a little greedy in the war department. Does that mean they should be destroyed? Probably not. Should they be banned from government contracts for a bit? Most definitely.

They can still work internationally. All of the government contracts and contractors that currently operate will still operate. Another company will bid the job and probably hire the same people to do the work. It could be perhaps legislated as such. These are government contracts and the government / judiciary are making the decisions. The work will still need to be done. A maintenance worker or a property manager that works for SNC Lavalin under contract to maintain an office building would still be required, regardless of which company bids for the job. The local employee who was the maintenance guy is still the local employee who knows that building inside and out. Assuming we’re not getting into a temporary foreign worker situation; all things should remain equal with a different company logo on the workers shirt.

A thief or a crook is never caught the first time.

They’re probably not caught the second time neither.

Let’s not forget that SNC-Lavalin was also involved in the smuggling of Muammar Gaddafi’s son, Saadi, out of Libya (source).