He wakes up. The man is lying on a hospital bed in an open-back shirt and lace-less shoes when a nurse walks in and asks him if he knows why he’s there.

The man nods his head to indicate an affirmative ‘yes’.

The nurse, emotionless, writes something down on her clipboard and walks out of the room. A few moments later; two security guards and a policeman escort the man and his bed to an interrogation room where a portly blood technician draws four tubes of the green-stuff to figure out what’s going on.

Back on Earth; the research team haphazardly works through which contingency plan to go with after one of the mapping ships crashed somewhere near what the inhabitants call New Mexico. The team was close-scanning to find the source of the erratic radiation blasts that our sensors keep picking up.

“New pilots…” the commander says as he shakes his head on the bridge of the lead ship, laughing.

“We have to go back!” the captain of the second ship demands through a thought-dream transmitted seamlessly to the commander.

“We did.” glimpses the commander, timeless in his understanding of the dimensions of existence.

“Who’d you send in?!?” inquires the man. “BlorgDamnit!! It had better not be Dennis-Brian! That blorks skill set as a pilot is as well-tuned as his moral compass! Well!!?? Who was emitting such sporadic splashes of aggressive radiation ding dongs on the blue-green one?!”

“Sir… you really need to rest.”

Suddenly the task force general and his adjutant enter the room, “Dennis-Brian-The-Selfish crashed into the blue-green one; forever contaminating their timeline as first-contact.”

“Dennis is such an idiot.” 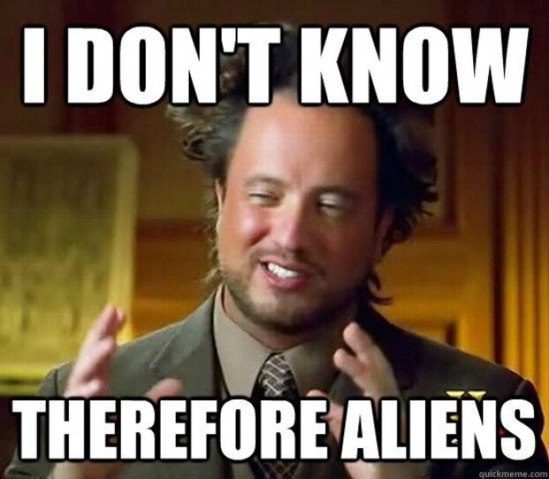